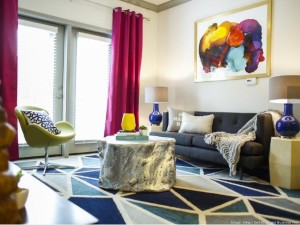 And the company expects another 30 units to come online in the coming days as it aims for completion of the $46 million development by late July.

Kelli Lawrence, a partner with Cityscape Residential, invited us into the complex for a tour on Tuesday afternoons. She showed us the completed leasing office, which leads into an amenities space with a business center and Internet cafe. The space also has a lounge area with self-serve Starbucks coffee and an interactive arcade and gaming area with flat-screen televisions mounted on the walls.

The complex also has a fitness center with free weights, yoga equipment and cardio machines, and it has a dog spa and dog park.

We also toured two finished apartment units, including the two-bedroom model unit, which was decked out in brightly colored furniture. It has large bedrooms and bathrooms and a spacious kitchen with quartz countertops, tall cabinets, a pantry closet and high-end stainless steel appliances. The kitchen and living room areas have an open floor plan with wood-like plank flooring, and the bedrooms have carpeting.

Lawrence said Axis on Lexington is about 10 percent leased with interest coming from across the country, particularly those who have relocated to Louisville from larger metropolitan areas or coastal cities.

The complex is spread across three five-story buildings with underground parking and has studio, one- and two-bedroom units. Base rents start around $899 for the studio units and go to more than $1,600 for two-bedroom units. Cityscape officials said some of the larger apartments on the upper floors, which have tall windows providing views of downtown Louisville, will climb to nearly $1,800 per month.

As more units start to come online, Lawrence said, crews should start completing 10 units per week into the summer. Each building will have internal courtyards with grilling cabanas and other amenities, she said.

Prior to Axis on Lexington, Cityscape Residential completed the 312-unit Apex on Preston, and another large Louisville apartment project on Simcoe Lane is tied up in court on a zoning appeal. Lawrence said Tuesday that company officials hope to start construction on the Simcoe Lane project before the end of the year.

Our tour of Axis also came a day after Cityscape filed plans to construct a 370-unit apartment complex on Tucker Station Road in east Louisville near the Xscape Theatres movie theater and the Main Event entertainment complex in Blankenbaker Station Business Park, off Interstate 64.

As I reported yesterday, the complex would be spread across 22 two- and three-story buildings, and Lawrence anticipates the project costing more than $50 million. The plan submitted to the city calls for a one-story clubhouse, a large pool and multiple open recreational spaces with dog parks.

Rental rates have not been established for that as-yet-unnamed project, but Lawrence wants to break ground on the site sometime in 2017.