Three projects are part of a surge in downtown KC apartments 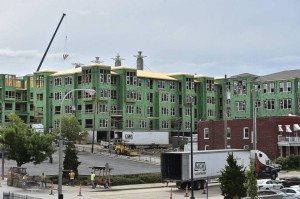 View of part of the Summit on Quality Hill project, centered at 12th and Washington, looking south from across 12th Street. Jill Toyoshiba jtoyoshiba@kcstar.com.

A stretch of bright green walls, looming above the bluffs of Kansas City’s downtown, radiates to passing drivers on Interstate 35 below that there is a lot — really a lot — of apartment construction in the central business district.Those green walls are a temporary layer before exterior treatment is applied to five new apartment buildings clustered at 12th and Washington streets. When clad, the Summit on Quality Hill apartments will add earthier tones to their 5.25-acre development.

But while their color will be quieted, there appears to be little muffling of the residential march toward the city’s core.

Cityscape Residential, the Indianapolis-based company developing the 252-unit Summit on Quality Hill complex, also is behind a nearby project, Apex on Quality Hill, which is adding 138 apartment units at 10th and Jefferson streets.

The company’s belief in downtown’s surging residential market is echoed in the Crossroads Arts District, where its 221-unit Crossroads West is planned for the site that formerly housed the Jones Store warehouse, which was razed recently, just off Southwest Boulevard.

Cityscape’s 611 new units represent about a third of the approximately 2,100 apartment units currently under construction in and near downtown. And that’s not counting another 1,500 or so units that have been announced but not yet started.

Is it too much? Will supply exceed demand? Only time will tell. But planning experts think the developers — many of them attracted to Kansas City from out of town — have good odds for success.

“Downtown occupancy is at 97 percent right now,” said Tommy Wilson, who keeps track of such numbers at the Downtown Council. “One Light is 100 percent leased. So is the Argyle building,” a newly renovated former office building on 12th Street.

One Light, the glassy 25-story tower that opened six months ago at 50 E. 13th St. and quickly filled its 315 luxury units, sold out its priciest units — costing more than $3,000 a month — first. It made a big splash in a central business district that hadn’t had any new apartment construction for decades.

Two Light, a second tower by the Cordish Co., is being built now at Grand Boulevard and Truman Road and is targeted for a Spring 2018 opening.

Meanwhile, other new apartment construction is underway in the River Market north of downtown, in Columbus Park just to the northeast, and in the Crossroads, Union Hill and Hospital Hill areas to the south.

Most of the built-from-ground-up units followed residential conversions of former office, warehouse and school buildings throughout the central business district. That conversion trend isn’t over yet. Apartments recently were announced for two more old office buildings on Broadway.

Wilson, at the Downtown Council, said the greater downtown area’s residential population, estimated at about 24,000 now, could rise to nearly 29,000 with the announced apartments. Five years out, the best guess indicates that nearly 33,000 people will call the core home.